Shining on and off the track

Trinity alumnus Brianna Kerekes ’12 is being recognized for her achievements on and off the track. The West Virginia University red-shirt freshman recently ran in the 800 meters preliminary competition at the Big 12 Outdoor Championship meet. Though she missed qualifying for the finals, her time of 2:14.70 was a personal-best.

A stand-out student, Brianna also earned Academic All-Big 12 First team honors. To be named to the team, a student must maintain or exceed a GPA of 3.20. When she enters her junior year in the fall of 2014, Brianna will begin her first year in the WVU Occupational Therapy program.

As a Trinity senior in the school’s inaugural track season, Brianna received All-State honors, placing 4th in the 100m, 2nd in the 200m, and 2nd in the 400m.

Johanna Collins-Wood ’05 has recently relocated to London, England to work as a lawyer in the London office of Davis, Polk & Wardwell, a New York-based US law firm.

At Davis Polk, Johanna practices US corporate law for large European banking and corporate clients. Her focus is on capital markets, particularly initial public offerings in both Europe and the United States. In London, Johanna attends an evangelical Anglican church and has served as a leader for the church’s Life Course, an eight-week course for people who are new to church and would like to explore what it means to have a relationship with Jesus.

Johanna credits her education at Trinity Christian School with instilling in her the determination to always do two things in life: seek out the will of the Lord and do it wholeheartedly, and always dream bigger than what you can accomplish alone.

When asked about her recent recognition, she expressed, “This honor means a lot because it shows all the hard work I’ve put in to truly improve the gift God has given me. Without Him, it wouldn’t have been possible.” 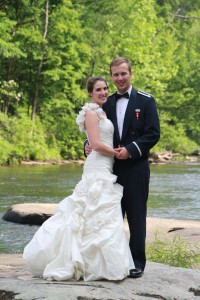 Trinity Alumni Kris Warner and Maggie Graham were married on June 8, 2013. Kris, a Second Lieutenant, is attending graduate school at the Air Force Institute of Technology in Dayton, OH where he studies Computer Science and Electrical Engineering. Maggie is working as a staff nurse in the Critical Decisions Unit at Kettering Health System, also in Dayton.

Kris graduated from the United States Air Force Academy in May 2013 with a bachelor’s degree in Computer Science Engineering. He served as Squadron Commander his senior year. Kris is the current Student Body President at AFIT.

Smiles and lively conversations marked the annual alumni reception. Trinity graduates enjoyed seasonal refreshments while visiting with one another and their former teachers before the TCS community dismissed for Christmas break. 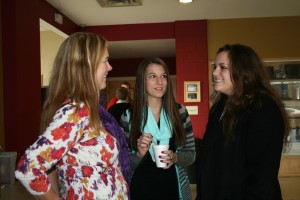