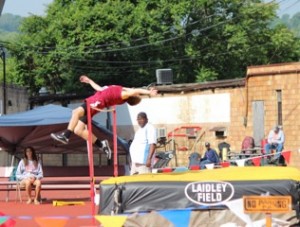 On Saturday, May 23, the Trinity track team headed home from the 2015 WV State Track meet with a record number of All-State honors. The Warrior athletes collected a total of eleven medals, exceeding their previous high mark of seven earned in 2012, the inaugural year of the high school team. 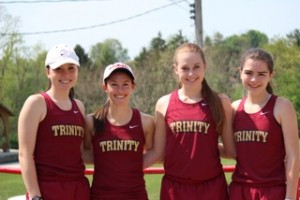 In the running events, senior Presley Jordan placed third in the 110-meter high hurdles. She added a fifth-place finish in the long jump. Emily Saurborn capped off a successful freshman season by placing sixth in the 800-meter run. The distance duo of sophomore Piper McLaughlin and senior Abbie Barnett took third and sixth respectively in the 1600-meter race.

For the fourth consecutive year, the girls’ 4×800 relay team placed in the top six. This year the team of McLaughlin, Saurborn, Olivia Kelley, and Barnett took fifth place with a season best time of 10:25.39. McLaughlin also placed 2nd in the 3200-meter run.

This marks the fourth and final year of coaching the TCS track team for Lori DeVault and her husband Tyler. Lori started the track program at Trinity with a middle school team in 2010, adding the high school team in 2012. The young program met with success from the onset, producing Trinity’s first Division I athlete Brianna Kerekes. Kerekes, who runs cross-country and track for WVU, recently qualified for the NCAA regionals in the 1500-meter run. Due to their dedication and enthusiastic leadership, the DeVaults’ successor will have a strong foundation on which to build the track program in the coming years.

Congratulations to the team and the coaches on a great season!