Piper McLaughlin will represent Trinity Christian School on her second consecutive trip to the state cross country meet on October 31, 2015. 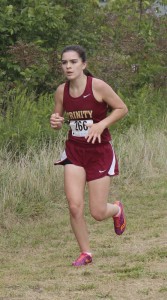 The high school junior will travel to Cabell Midland’s Cross Country course to compete against the best runners from across West Virginia. No stranger to the state competition, McLaughlin received an all-state track honors for both her freshman and sophomore years, earning individual medals in the 1600m (3rd place – 2015) and the 3200m (4th place – 2014 and 2nd – 2015), and as a member of the 4x800m relay (2014 and 2015).

We congratulate Piper on qualifying for States and look forward to her finishing out the season with a strong performance.