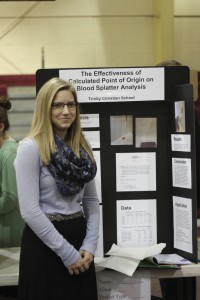 On a wintry January morning, the Trinity gymnasium was transformed into the 2016 Science Fair Extravaganza. Projects lined rows of tables as students from grades 5, 7, and 9 presented their findings for adjudicators from the local scientific community, including representatives from Mylan, WVU, and NIOSH. The competitors fielded tough questions, with the students’ research occasionally sparking debate between the judges.

The students’ preparation and the caliber of their projects were noted by the panel of professionals as evidenced by remarks received following the fair.

“At their age it is tough to get up in front of your peers to present a project and it takes a lot more guts to stand in front of a poster and defend the experiments they did in front of a complete stranger scoring them,” expressed one judge. They continued, “I am blown away! They all did such a fantastic job and it was such a humbling experience.”

Another judge shared their observations, commenting, “I was very favorably impressed with your science fair. Most impressive was the display that each student had printed and assembled. The consistency in their displays shows mainly superior guidance. Congratulations.”

For many of the students, their entry in the Science Fair Extravaganza qualified them for the Regional Fair or the Association of Christian Schools International (ACSI) Academic Day. The complete list of students and their awards appears below. Congratulations to all!